My Grandpa Mel is 6’2” and lives in New Jersey, and my Grandpa Sam was 5’0” and lived in North Dakota, and they have something very important in common: they love/loved to tell jokes.

Joke-telling is a very Jewish grandpa-y thing to do, and they each approached it in a different way.  My Grandpa Mel has always been a scholar of humor, pouring through stacks and stacks of joke books to find that one perfect little knee-slapper.  He recently retired after more than SIXTY YEARS as a dentist, and so the vast majority of his jokes to date could be told to his patients of all ages – including this one, which I’m pretty sure is the only of his favorites to include a dentist:

A man goes to his doctor, distraught.

“That’s interesting,” says the doctor.  “Give’er a rip, and let’s see what we’re up against.”  And sure enough, a few seconds later, he hears a very quiet “Honnnddddaaaa” come out of the man’s rear.

The doctor is perplexed; and so he gathers a team of nine medical specialists to examine the problem.  And, to make it an even ten, he calls in his next-door neighbor, a dentist.

The man passes gas again, and the specialists immediately start ordering up tests and x-rays to get to the root of the problem.  The dentist, on the other hand, opens the man’s mouth, gives it a quick look, and stops the room.

“Sir,” he says, “You have an abscessed tooth.  Come see me in the morning and we’ll take care of it.”

Everyone is astounded.  “How do you know?” The man asks.

“Because,” the dentist says, gathering his coat and hat, “Everyone knows that abscess makes the fart go ‘Honda.’”

My Grandpa Sam, on the other hand, was an old school joke-teller – sticking closely to the Jewish and Yiddish humor that had been passed around with glasses of Manischewitz for generations.  Both of my grandfathers were raised speaking fluent Yiddish, a language that is kind of a mix of German and Hebrew, for lack of a better description.  I don’t know if it’s the Germanic influences or the hacking noise you need to pronounce some of the tones, but Yiddish has a habit of sounding like one long string of swear words.

My Grandpa Sam decided to lean into this stereotype.  I have dozens of memories of him whispering, “Mandy, repeat after me: Kish mir im tuchas” (this delicately translates to a request to smooch a body part that shares a name with a donkey), and my grandmother materializing from wherever she was in the house to shout, “Sam, stop teaching her that filth!”

As such, most of the Grandpa Sam-borne Yiddish phrases and jokes that have survived in my family are not fit for polite company.  I’ve been mentally sorting through all of his jokes for two weeks, and this is absolutely the only clean one I can think of:

Bubbe (Grandma) is walking her grandson to the school bus on his first day of Kindergarten.

“Please behave, my bubbaleh,” (little doll) she tells him.

“Do good listening and eat your lunch, tataleh (little boy),” she continues.  The bus pulls up.

“Come straight back home on the bus, my zeiskeit (sweetness),” she calls out, waving goodbye.  “Your Bubbe loves you!”

At the end of the school day, the bus returns.  Bubbe hugs her grandson tight.

“My hertzeleh (little heart),” she says, “Tell me about your first day of school.”

“Well,” the little boy says, “I learned my name is David.”

The photo above was taken by my Uncle Dean in Westfield, New Jersey.  In it, my Grandpa Mel and I are clearly enjoying feeding the pigeons.  (I’m still not so sure about birds.)

Speaking of good times, this week’s news has fishermen brothers, an impressive anniversary, and a flexible classroom model.  Read on.

Fargo’s Pam Kriesel-Koll has been honored with a Citizens Lifesaving Award for helping her daughter survive a heart attack. (KVRR)

Congratulations to Hillsboro’s Ed and Marlis Olsen, who celebrated their 70th anniversary on October 4! (Hillsboro Banner)

Fargo attorney Mark Schneider is publishing his first novel: the fictionalized story of Mark and his wife’s life in historic Ireland and Fargo. (Grand Forks Herald)

A local bakery in Minot is donating $5 for every dozen donuts sold to raise money for a family who has faced unspeakable loss. (KX Net)

Fargo’s Dallas Gunkel is in need of a new kidney, and he’s asking North Dakota to help. (Fargo Forum)

This is a Facebook post from an elementary teacher in Grand Forks.  We are so fortunate to have so many great educators across the state that are truly rooting for their students: 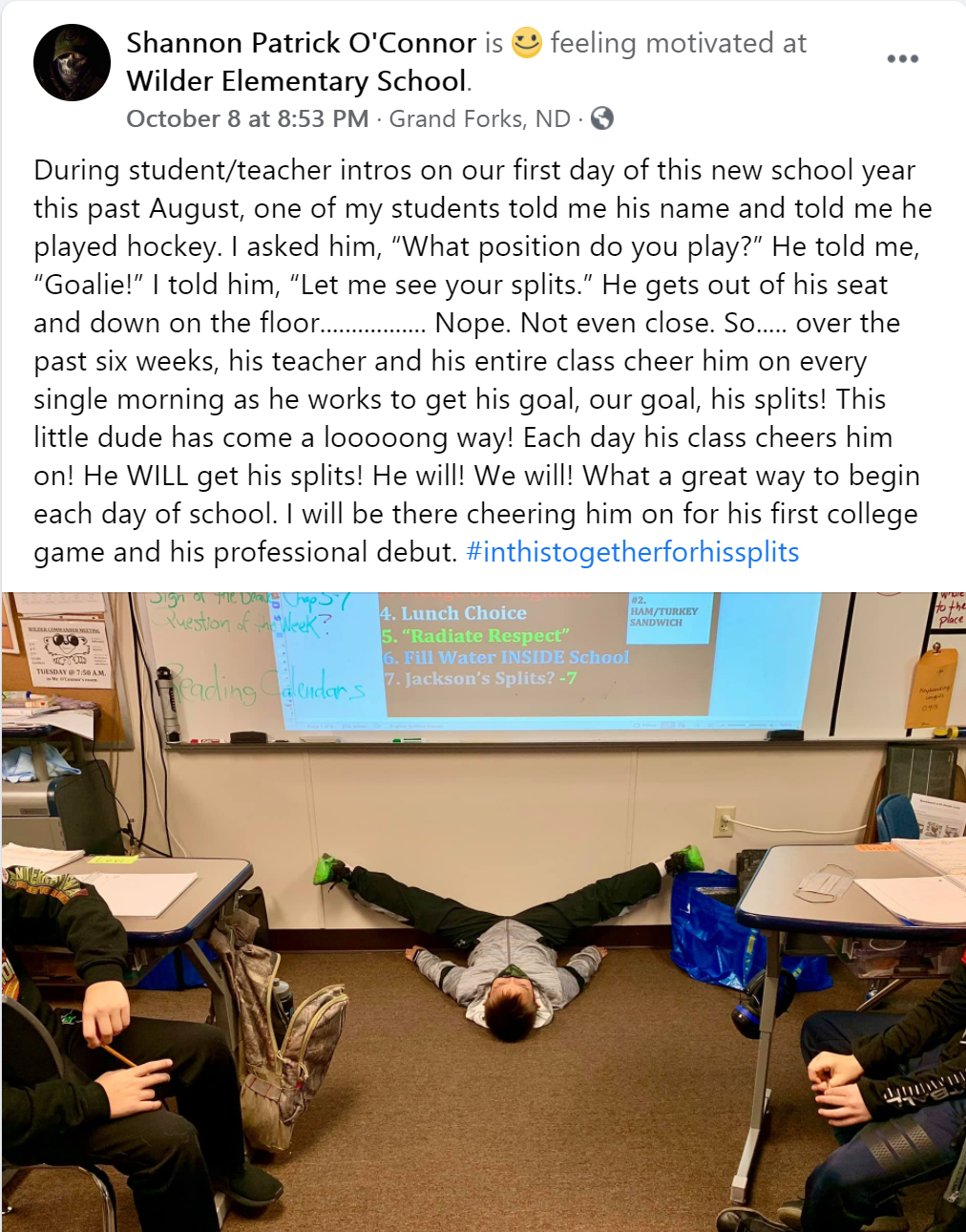 (Like the story above?  Check out last week’s tale of a pile of haybales. And speaking of last week, I incorrectly identified Lewis & Clark Elementary as being located in Minot. The school in the story is located in Williston.)