“You must not be from around here.”

If you are a North Dakotan that has stepped outside the sugar beet region of the Upper Midwest, you have probably heard this phrase – followed, of course, by:

I’ve been privy to a couple of variations.  In the mid-80s, my New Jersey grandparents took my sister and me for a rapturous trip to New York City’s F.A.O. Schwartz.  A local news crew was broadcasting live from the promenade outside of the toy store and the on-air personality pointed to us in the center of a huge crowd of people and shouted, “You!  You’re an out-of-towner, right?  Do you want to be on TV?”  Obviously we did, and she was thunderstruck when we told her we were from the Flickertail State.

“The Dakotas?” she asked; and then, in full seriousness before my grandmother gave her a Jersey eye roll that undoubtedly knocked her dead, “Is this your first time around electricity?”

(In case you were wondering: North Dakota became one of the 50 United States in 1889.  South Dakota also was made a state in 1889, albeit a different one than North Dakota.  Just like New Jersey and New York are not collectively known as the “News,” North Dakota and South Dakota have their own separate governments and, related, placenames.  We also have electricity, and we even had it in the 1980s!)

Years later, on my third day at Boston University, I went to a party where I proudly announced my hometown of Grand Forks, North Dakota to anyone in earshot. A drunk upperclassman gave me a high five and proclaimed,

I, too, like Canada.  In fact, I married a Canadian.  If you set aside the obvious use of “back bacon” in lieu of Canadian bacon and the fact that we are two distinct countries, this is the difference between Canadians and North Dakotans:

In our mid-dating days, my now-husband and I ventured up to his hometown in Saskatchewan for a long weekend with his family.  We awoke the first day and gathered in our pajamas around the kitchen table for coffee.  As the clock struck 9, the back door opened.  It was one of the neighbors with his own cup of coffee, who set down a plate of muffins as my future father-in-law pulled in a chair from the next room.

Twenty minutes later, another neighbor, another plate of goodies, another chair, another cup.  As the morning wore on, the neighbors would rotate in and out, my in-laws would brew coffee – although some brought their own carafes – and when one of us needed to go and shower or something, we’d get up and do that and then rejoin the group.  When the clock struck noon, my mother-in-law set out lunch, just in time for the cousins to arrive.

This type of thing would not happen in North Dakota.  The socializing, yes.  The celebration of an out-of-town visitor – of course.  The presumed potluck?  You betcha.  But an unannounced pop-in?  Unless the house was on fire, nope.

We would have called first.  Or hovered casually within eyeshot.  Or waited for the Facebook photos and commented with a “Looks like a fun visit!” and then dropped off a pan of bars at a time that was convenient.  This level of subtle exuberance mixed with a quiet fear of being rude is what is called “North Dakota Nice.”

North Dakotans are nice because to us, no one is a stranger, and if no one is a stranger, than you’d better be nice.  Have you ever seen someone in an airport scream at a baggage claim agent, and then immediately walk over and give the warmest, most wonderful hug to the friend picking them up?  It’s easy to be terrible to people you don’t know because, who cares.

We have 700,000 people in North Dakota (by comparison, San Francisco has 850,000).  A hefty majority of those 700,000 are third- and fourth-generationers like me.  Which means for a hundred years, our great-grandparents and grandparents hovered around each other’s homesteads waiting to be invited in; and now everyone is a friend, or a friend-of-a-friend, or a neighbor, or a cousin, or someone you played against in a hockey tournament.

But since we don’t actually know everyone, North Dakota Nice is like being at a wedding where you are an old work friend of the groom, so you do your best to remain a polite part of the festivities without being the person who draws attention by cutting in front of someone else at the buffet or starting an unprovoked conga line.

As you can imagine, living in a place that’s nice is…well, nice.  A while back, I was having lunch with my husband and our waitress found $20 on the floor.  The place was packed, and she went around table-by-table to ask if someone had dropped it.  No one claimed it.  One of the patrons suggested it was her lucky day.  “Ohhh, no,” she said, aghast.  “It’s not mine.  I’ll just put it in the Lost and Found.”  And she did.  And if no one came back in looking for it, chances are it’s still there.

This is also the kind of thing that happens in North Dakota: 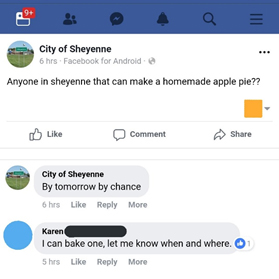 There is a slightly negative connotation to North Dakota Nice, too.  We don’t want to offend anyone, so if something does bother us, we have a difficult time expressing it beyond our most private circles.  Every conversation is held behind closed doors.  The newspaper never gets the full story.  No political poll has ever been accurate.

This is not to say that North Dakotans are constantly lying to one another; that would disrespectful, which is not nice.  Instead, we just speak the nicest truth we can and leave the rest out.  We have a deeply-beloved restaurant reviewer in Grand Forks that has never published a negative review in her impressive and expansive career.  This doesn’t mean she thinks every place is worthy of a James Beard.  If she doesn’t like the food, she reviews the things she does like: the ambiance, the salt shakers, the weather on that particular day and, occasionally, her lunch dates.

Sometimes, though, there’s nothing nice to say – and in those cases, North Dakotans state facts.  I own a pair of hot pink high-top sneakers that can probably be seen from Montana.  Usually when I wear them at least one person will say to me, “Your shoes are pink!”  Which is factually accurate, and also lets me know that I shouldn’t get them a pair for their birthday.

But honestly, there are worse things than our polite form of shade.  I recently attended a luncheon in which a contentious local political issue was raised, and two of my tablemates debated it for nearly an hour without actually revealing their own hands in the matter.  Since they didn’t want to make the other person uncomfortable, they had a lively, even-sided discussion where they played devil’s advocate for both sides of the situation, ate their chocolate cheesecake slices, and went their separate ways as friends.

Listen, we have our fair share of jerkfaces.  There are also wonderful people in large quantity in every city, state, and country everywhere.  But if your state is going to have a stereotype, it may as well be nice.

For as often as I am questioned about my place of origin by out-of-staters, it is by North Dakotans that I am more commonly asked, “Where are you from?”  I get it, though.

And I don’t know what you know about Jewish women from Russia, St. Louis, and New Jersey, but in my family if these mommas imprinted their genetics with any kind of slogan, it would be: “We have something to say.”

Which means that from this generational hotdish came my lovely, kind, gentle sister, and me, who has something to say.

If you’ve ever been cornered at a party by a person who felt it their duty to express every thought ever manifested, you’ll know that strong opinions and niceness rarely go hand-in-hand.  I have been called “nice” three times in my life, and were by my best friend who was raised in New Jersey and now lives in Boston and thusly has absolutely no barometer of niceness at all.

Instead, I am often described by North Dakotans as “energetic,” which is the nice way of saying “a lot.”  I am supremely confident regardless of any situation, a quality when mixed with an inability to shut my own mouth, usually manifests itself as me being a super-duper know-it-all.  Here is an example:

I work for an architecture firm.  We used to have a small plane which we shared with three other companies to more efficiently reach some of the smaller towns in North Dakota.  During one of its flights, an engine quit and they had to make an emergency landing.

I was not on the plane when this happened. I didn’t pick the passengers up from the airport afterwards. In fact, I’m not even sure I heard the original story first-hand.  However, I later spent more than 20 minutes on a dramatic retelling of the entire event, complete with a detailed (and probably made-up) lesson in airplane mechanics, to the wife of one of the passengers of the actual flight.

Did I mention said wife was also a professional pilot?  “Well,” you could say, “What are the chances that she knew how to fly?”  Grand Forks has one of the top aviation schools in the world.  Many North Dakota farms employ crop dusters.  Most small towns have a landing strip.  The chances of her being a pilot or pilot-adjacent were about the same as her being Norwegian.*

Of course, in true North Dakota form, she listened very nicely without any form of contradiction or disinterest and, in true Amanda form, I look back on the entire conversation as a major success.

The one or two times a year the national media picks up a story about North Dakota, it’s always terrible and definitely not an accurate overall representation of the lovely state we call home and, well, I Have Something to Say about that. Which is why I created NorthDakotaNice.com – because bragging about yourself is a very un-North Dakotan thing to do.  So if my fellow North Dakotans aren’t going to do it, I’ll do it for them.  And know that anything on the site written by me – like this, for example – requires a disclaimer: read it with a heavy grain of salt, or a slice of buttered lefse.  If you are not from North Dakota, know that I am nowhere near the best representative of my fine state.  If you are from North Dakota, I look forward to running into you outside of your house so that you can tell me that I made a website.

(Also, a quick side note: You may have also heard “Minnesota Nice” or “Midwestern Nice” or any variation of such because there was a big meeting between Best Dakota, Minnesota, South Dakota, Wisconsin and a few of the other upper states in which the general agreement was, “Well, this is nice.”)

(*And there are a lot of Norwegians in North Dakota.)