According to MyNDNow, there are 55,000 people (which breaks down to 1-in-11 children and 1-in-13 individuals) facing food insecurity in North Dakota.  While the statistics are not nice, the fact that there are North Dakotas working to reduce the stigma of food stamps and provide food and education to the hungry is hopeful.  (MyNDNow)

And it’s not just one organization working to end hunger.  Even in a friendly state like North Dakota, there is plenty of business competition – which is why it’s pretty nice that eight banks in Bismarck came together to collect and donate more than 60,000 food and household items for the Emergency Food Pantry. (KFYR TV)

After 30 years of volunteering on the Historic Preservation Commission, Marsha Gunderson has been presented with the Alexander Griggs Award.  The Award, named after the official/unofficial founder of Grand Forks, recognizes exceptional efforts to preserve local history.  Hopefully the award was made with Minnesota Sandstone, the same material as many of the historic buildings downtown #TheMoreYouKnow. (Grand Forks Herald) 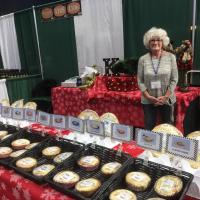